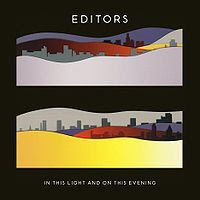 Much has been made about THE EDITOR'S sound being somewhat derivative of JOY DIVSION, mostly due to the striking resemblance of lead singer Tom Smith's baritone to that of the late Ian Curtis. Although that comparison still holds some truth, the band has slowly worked it's way away from the straight up post punk of their debut and into something more reliant on synthesizers and moody bass lines. So with the release of their third album, "In This Light and On This Evening", the band jettisons it's worship of the artists formerly known as WARSAW for a tribute of sorts to what came out of the ashes of Curtis's death; NEW ORDER.
The prevalence of synths on the latest record give it a more updated feel. The lead single, "Papillon", is a dance song that Sumner and company would have been proud of. The moodiness of the title track recalls early New Order and the overall use of the bass to drive the song structure seems to echo the importance bass held to New Order throughout their career.
But this might appear to undersell the record and the band. In fact, this might be the first record that the band has made that is finally their own sound. Here are songs that have a more anthemic feel to them that was lacking on the first two records. "Bricks and Mortar" builds and builds on itself to it releases the powerful chorus towards the end. The discordant synth lines of "The Big Exit" make them sound like THE CURE for a moment. It's certainly a dark record, which is not new territory for the band. The only real complaint is the lack of real driving rock songs, which by the end makes the collection a little more muted than before. But as a transitional step to a new phase of the band, it's a welcome step in a new direction. Besides, leave the copying of Joy Division to Interpol.
(mp3) Editors -- Papillion
Posted by Jon at 4:56 PM