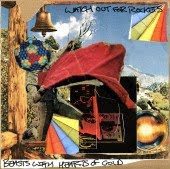 WATCH OUT FOR ROCKETS are from Austin, Texas and according the blurb they sent me they are the greatest band ever. Now while I'm not quite willing to go out on a limb and say that I will say this...they are certainly an entertaining and intriguing listen. I can't really figure out why but I could have told you they were from Austin just by listening to them. There is something about their sound that screams southwest. Their record, "Beasts With Hearts of Gold" is such an eclectic mix of sounds and structures that it's really hard to pinpoint a given sound. At times they remind me of SPARKLEHORSE, mostly due to the distorted vocals in songs like "Class Action Pant Suit" and "Urgent Serpent Merchant". There is a country swing to some tracks while other have an early PAVEMENT feel to them. In fact, that type of snarky, DIY ethic is probably the unifying force to the record. It sounds like most of the songs were recorded on lo-fi four tracks. It gives the whole album a roughed up feel. There are also touches of THE PIXIES, REVEREND HORTON HEAT and a host of classic punk rock riffs throughout the 20 songs (most of which clock in at 1-2 minutes long).
The highlight of the record for me is "Heart Poppers", which is the closest thing to a traditional rock song on the record. It shows a band that could grow into something more commercial if they chose to go that route and write catchy pop songs. I don't think they will simply due to the rest of the record's more esoteric approach but it's certainly part of their DNA. The nice thing about these guys is their versatility has meant that each time I listen to the record I discover something new, which means the record will stay fresh longer and has so far kept my interest.
(mp3) Watch Out For Rockets -- Heart Poppers
(mp3) Watch Out For Rockets -- Ready The Horses
Posted by Jon at 10:31 PM

Actually they're from Wisconsin. They moved to Austin. So any "sound" they have they didn't get from being from Austin. They're just weird boys. They've always been that way.