I Forgot How Much I Love Counting Crows 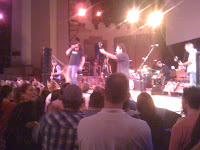 Some bands come and go in your musical conscience. Bands that were once staples of your play lists (or mix tapes if your my age), seem to vanish and are replaced by newer bands with fresher sounds. It's the nature of our listening tastes. Those of us who enjoy the collective nature of music are always looking for the next great sound. But then something happens to remind you why you fell in love with a band in the first place.
COUNTING CROWS will always be the band of my early 20's. I was first exposed to them in college (I can remember digging out "August and Everything After" out of a stack of CD's with my friend Scott, pressing play and being in awe from the first strum of the guitar) and stayed with the band throughout my post college wanderings through the music industry. They were not an especially cool band (often thrown in with THE GIN BLOSSOMS and DAVE MATTHEWS BAND) but had a certain level of success to the point where they are still alive and kicking to this day. I have dutifully purchased all their albums but over time their place on the old iPod has dwindled to just a few songs.
But last night they were rocketed back into my listening galaxy. I went to a special screening of Adam's new movie FREELOADERS (which unfortunately was not very good). Following the movie my wife and I thought the band might play a song or two. Instead the boys brought an hour long set of songs mostly from their second album "Recovering the Satellites", which I personally feel is their best. Duritz still knows how to work a crowd with his speak sing approach to his singing. The band was tight and sounded great. To the best of my recollection the set was as follows:
Catapult
Mrs Potter's Lullaby
Mr. Jones
Goodnight Elisabeth
Angels of The Silences
Hard Candy
Friend of the Devil
Recovering the Satellites
Miami
A Long December
(there may be a song missing but I didn't jot it down like I normally do)
I couldn't resist playing their music throughout the day. It's earnest and true. It's pop and rock and classic in its structure. It is not ashamed to be lovelorn and simple in places. It is the very definition of classic rock and roll and it's brilliant. There was a time I was embarrassed for liking the Crows (they are about as un-indie as you can get), but that's in the past. I love this band and always will. And that is what being a fan is all about...
(mp3) Counting Crows -- Mr. Jones
**Still a great pop song about wanting to be a rock star. I cannot tell you how many times I have sung this in the car at the top of my lungs. You should to, you will feel better for it.
Posted by Jon at 7:04 PM