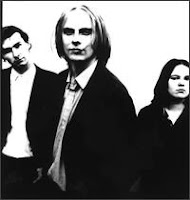 In every movement there are those bands that don't get the respect and admiration they deserve as compared to others. THE AUTEURS clearly are one of those bands. Led by singer and principle writer Luke Haines, The Auteurs brought a sense of poetry and lyricism to the Britpop movement that cut against much of the original working class leanings of the other larger bands. Haines traveled in imagery of French lifestyle and love found and lost. The bands use of acoustic guitar and synths gave their sound a more cosmopolitan feel as if plucked from the soundtrack of a foreign film.
The band's second record, "Now, I'm A Cowboy", refined their debut's style and was even more esoteric. Although it leads with a bang with the rocking "Lenny Valentino", the record settles into a leisurely pace of melancholy and dreaminess. Highlighting the record is the sublime "New French Girlfriend", which had even more power live. I think it's just that most people simply didn't get the band. The next album saw the band hook up with Steve Albini who pretty much decimated the band's sound and one of my colleagues at the college station to publicly call for both Albini and Haines' heads. After that it was downhill from there. Every once and awhile they get name checked as part of the movement of Britpop but they actually were quite removed from the style that was the signature of the genre. There closest peers would probably have been PULP (who will get there own mention in the future) and gave the sound a more grown up, less working class feel.
I have to say I was surprised at how well this record stood up over time. It has a timeless quality to begin with that is only enhanced when you appreciate the subtlety in the music. This is a shining example of the excitement of the music from this time.
(mp3) The Auteurs -- Lenny Valentino
(mp3) The Auteurs -- New French Girlfriend
(mp3) The Auteurs -- Underground Movies
Posted by Jon at 6:27 PM

A fine piece of writing.....I reckon I will one day come back and plagiarise (spelling of which was checked by looking up the lyrics sheet on Cemetry Gates....)

I meant to say....if you ever want some stuff from Black Box Recorder (which was Luke Haines next project), you know how to find me.....

And if you want The Auteurs vs Mu-ziq, you know where to find me.