The Return of Voxtrot 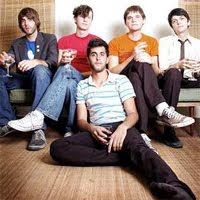 I admit that I wanted to like VOXTROT a lot more than I did. I listened to their proper debut quite a bit when it came out and was struck by the fact that it could have been so much better. Hidden in the album were shades of early U2, The Cure and countless other great alternative bands of yore. Maybe that was my problem; to many influences that couldn't settle on one cohesive direction. So I almost ignored the new material that has slowly been leaking out of the Voxtrot camp. The first new track was a dark, almost tribal track called "Trepanation Party" that does a great job of finding a groove and sticking to it.
Then came the latest, and first official single, "Berlin, Without Return." What makes this track such a leap forward is the dialed tone nature of lead singer Ramesh's vocals so that the song finds a nice chorus without losing the wordplay of his lyrics. It is both a departure in their sound and a natural evolution and gives me a lot of hope for the whole album.
(mp3) Voxtrot -- Berlin, Without Return
Posted by Jon at 11:56 PM