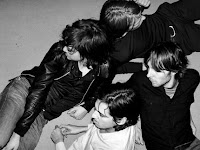 Phoenix is a french band responsible for one of the catchiest songs of all time, "If I Ever Feel Better", from the debut record back in 2000. Since then I haven't paid them much mind. Singles acts often disappear quickly leaving only the slightest of footprints. So imagine my shock when I started listening to their latest, "Wolfgang Amadeus Phoenix", on how mature and detailed the songs have become and yet have not lost any of their signature dance rock sound. The only strike against the record is that it was leaked around the same time as the YEAH YEAH YEAHS and U2 so it gotten little press. This should change with the official release in May.

The first couple of songs, "Lisztomania" and "1901" fall close to the sound from their previous records with a little crunchier guitar on the second track. Things take a more orchestral approach with the seven minute "Love Like A Sunset" which takes a slow building synth line that sounds like a lost ORBITAL song before hitting it's stride. The second half of the record allows the band to start tinkering with their sound, adding overdub effects to the vocals and a nice guitar pick effect on the gorgeous "Rome".

The more you listen the more you fall in love with each song. "Countdown" originally had a throwaway feel to it but after several listens it has slowly crept into my subconscious. Which is the whole feel of the record; slight at first listen but with each pass there is more going on that leads to greater involvement by the listener. I have no doubt this will be in my top records for the year.

p.s. for sheer absurdity check out the lead singer's one off band with members of Daft Punk called DARLIN'. Fuzzed out Beach Boys is not what I would have expected...
Posted by Jon at 10:12 PM