A recommendation from The Wife 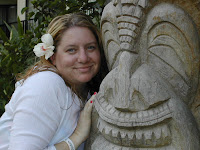 I mock my wife for her taste in music. Her love of Country music and Jimmy Buffett can be somewhat perplexing at times. I rarely understand why she has five singers on her iPod all named Kate (or some version thereof) and they all have the same mopey, chick folk sound. There are times when her sense of the sheer cheesiness of a song can be a bit overwhelming. For a self appointed musical snob such as I the mere fact that she and I have co-existed (and flourished) for the past five years of marriage (as celebrated TODAY!!) is a testament to whatever higher being you believe in.

So every once and awhile she will shock me. Something will come across her iPod (which is always the musical delivery device of choice in the car) that simply floors me. How is it that you can like that and all the other stuff that clutters your iPod? How can you reconcile this band which is extraordinary with the flotsam that normally comes out of the speakers? She simply smiles, tolerating my boorish behavior as she is often forced to do, and says, "because I have more evolved musical tastes than you."

So here is the latest jaw dropping, knee bending discovery from my wife (who also counts MOGWAI, IRON AND WINE, and CASSETTES WON'T LISTEN among her favorites). Minneapolis has brought many great acts throughout American Rock History but nothing that sounds like CLOUD CULT. At times they sound like ARCADE FIRE mixed with THE FLAMING LIPS at then there are times when they sound like nothing out now. They employ odd sounds and unusual instrumentation to project stories of flaw, pain and despair. On other songs from their latest, "Feel Good Ghosts", they reach astronomical heights with sing along choruses and stomping bass and drum lines. For a record that is about loss (the lead singer lost his four year old child recently) it has a subdued yet celebratory feel to it.

I hate to admit when she is right (which is usually all the time), but she is right. In this case her tastes are better than mine. And as is the case for the past five years, her guidance has made me a better person (and not just in a musical sense.)
(mp3) Cloud Cult -- No One Said It Would Be Easy
(mp3) Cloud Cult -- Hurricane and Fire Survival Guide