Bring That Beat Back (Live Edition)

So electronic music can be real hit or miss when it comes to replicating it live. Most DJ's who record albums tend to use their live shows as a chance to mix their stuff up in order to keep the beat going (which is usually what the crowd wants). Some artists use live sets as a chance to extend their songs to absurd levels while others simply stand and play hoping enough lasers and lights will cover up the fact that being studio wizard does not make you an arena rock star. However, there are a couple of exceptions. 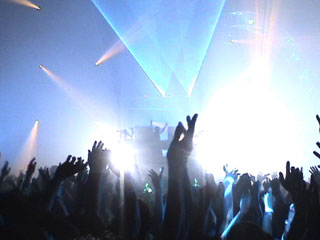 I saw ORBITAL live a couple of times and going into it I thought they would be mediocre. Their music is very nuanced and therefore might lose something live. Boy was I wrong! The music breaths in way that it doesn't on record. Though they didn't interact with the crowd the songs spoke for themselves. The brothers Hartnoll use the live set as a chance to play around a bit with tempo and pacing, speeding some things up and slowing other things down. But the highlight of their live set was always their live version of "Halcyon". Already a standout song live it gets an extra punch with a 3 1/2 minute addition of a mash-up (before such things were cool) of Bon Jovi's "You Give Love A Bad Name" and Belinda Carlisle's "Heaven Is A Place On Earth". This thing is freaking brilliant.

Another band that seems to have the live electronic thing figured out is DAFT PUNK. Having just released their second live record, "Alive 2007", this duo handles the show as close to a traditional rock show as an electronic band could. They tend to take a couple of their songs and mix them together. It ends up being quite effective and enhances the songs which on record can tend to drone on a bit. The show ends up sounding like one huge house party (which is most likely why LCD Soundsystem was so happy they played his house) with songs serving a set pieces and musical movements in a dance symphony. I can actually say this sounds like one electronic band I would still pay to see live.