Catching Up With An Old Friend

Many of you probably have the same problem I do. As avid music collectors its easy to lose track of some of your favorite records over time as you continuously seek out new and exciting bands. There's nothing really wrong with this, after all, what was new and interesting is what got us into the record collection business to begin with. But sometimes a long lost friend pops its head out and says hi. 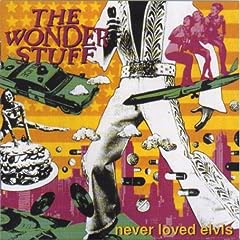 A few days ago my son was playing with a puzzle and kept shouting cow over and over again. For some reason I began thinking about a lyric from an old song "I'm building up my problems to the size of a cow". The lyric is both absurd and poignant. After about a day trying to remember the song (the ole long term memory ain't what it used to be) I finally landed on THE WONDER STUFF. So I pulled out their album, "Never Loved Elvis" and gave it a spin. Man what a brilliant album. From the opening rant of "Mission Drive" to the barroom feel of "Welcome to the Cheap seats" the band hit on all musical cylinders. Mixing Irish folk, country and rock together and relying on the brilliant poetry of lead singer Miles Hun, The Wonder Stuff were a true breath of fresh air. But the real joy was the gem of a track called "Maybe".

When I was in college, this was one of those songs that spoke directly to me and where I was at. I had little or no idea what I wanted to be or do. I was drifting between an interest in politics and a love of music. I fell hard for college radio and never imagined I would end up teaching. (to borrow another "Cow" lyric, Don't you think it's funny when nothings what it seem when your not looking forward?") But "Maybe" hit the nail right on the head. The ambivalence at one turn followed by the sheer conviction as the singer makes up his mind as to what he wants. Hunt seemed to be speaking to me through my headphones. Few songs have that power, even fewer come back to you with the same feeling years later. If you take no other song from me, take this one...you won't be sorry!!

p.s. apparently some form of the band still exists and is releasing a live album in two weeks. Who Knew?
Posted by Jon at 10:20 PM